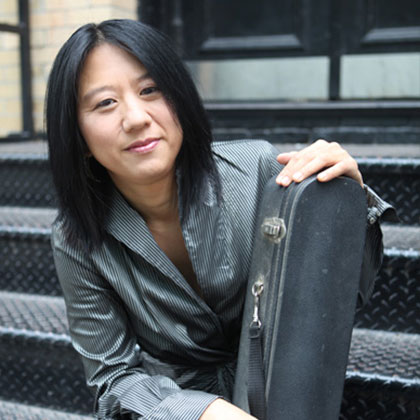 A native of Honolulu, Hawaii, violinist SUNGHAE ANNA LIM has performed throughout the United States, Europe and Asia and was a member of the Cassatt Quartet.  A keen advocate for new music, she is the violinist of the New Millennium Ensemble, winner of the Naumburg Chamber Music Award, and a frequent guest of groups such as Talea Ensemble, New York New Music Ensemble and Da Capo Chamber Players.  She has an abiding interest in early music, through her work with Nikolaus Harnoncourt in Salzburg.  As an educator, she has studied many approaches to violin playing in Europe and the US and currently teaches violin at Princeton University.   Regular music festival appearances include the Portland Chamber Music Festival, Maine Chamber Music Seminar, Prussia Cove, the Weekend of Chamber Music, White Mountains Music Festival and the Wellesley Composers Conference.  Anna serves as the artistic advisor for the Trenton Music Makers, an El-Sistema inspired program for children in Trenton, NJ.  She received a BA from Harvard University in History and Literature and completed her Diploma at the Salzburg Mozarteum under Sandor Vegh.